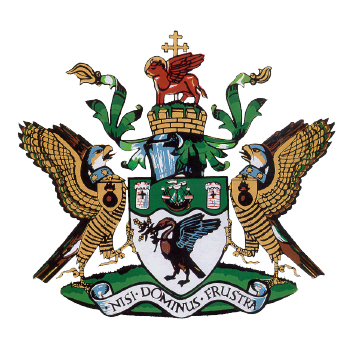 A crest or coat of arms is a heraldic symbol of the Council and one which embodies the rick history and identity of the local government area.

The origins of a crest or coat of arms dates back to the Medieval period where these symbols of a family, community or land owner, were a symbol of strength and leadership.

The crest has now been replaced by the logo as the symbol for the community and Council, however the crest is still retained as a symbol of the Mayor’s office and the strength and leadership embodied by the title.

Argent, A Cormorant or Liver Bird, wings elevated and addorsed Sable, beaked and legged Gules, in the beak a sprig of Wattle leaved and flowered, on a Chief wavy Vert a Lymphad, sail furled, between two Towers.

At the top of the shield, a Mural Crown, standing in front of a Cross Crosslet with a winged bull rising above emblazed in gold, armed and unglued.

On either side of the shield a Hawk, wings elevated and addorsed, beaked, legged, belied and jessed Or, gorged with a Collar Azure charged with two Estoiles and pendent thereform an Escutcheon Gold charged with a Grenade Sable.

The motto is a contraction of the first line pf Psalm 127. “Unless the lord builds the house, those who build it labour in vain”…typically summarised to either “Without the Lord, frustration” or “Without God all is in vain”.

The Cormorant or Liver Bird in the shield is drawn from the Coat of Arms of the City of Liverpool, England. The wattle, the floral emblem of Australia, provides a local connection to the English ancestry of the region.

The wavy line refers to the Georges River and the ancient ship and towers are drawn from the arms of Governor Lachlan Macquarie, founder of Liverpool in 1810.

The ship also refers to the shipping on the river and in combination with the towers refers to the military origins and connection of the city.

The Mural Crown, symbolising a walled city, the five towers are a modern elaboration relating to a town. Arising above, the grass mound, gold cross and winged bull are symbolic of St Luke’s and its importance to Liverpool.

The winged bull being the symbol of St.Luke, the patron stain of the local church.

From the collars of the hawks hand two shields, each with a fired grenade, the symbol of the Royal Engineers and the Royal Australian Engineers.

The motto is a reflection of the Anglican origins of the community, based around St Luke’s Church, and implies that unless we as a community become a servant of God, living by His power and for His glory, our lives lack all meaning and purpose.