Liverpool City Council acknowledges the original inhabitants of the Liverpool area, being the Darug and Tharawal Aboriginal people.

Council provides a number of initiatives to promote and celebrate Aboriginal culture within Liverpool.

If you wish to be part of the Aboriginal Consultative Committee or want to find out more about various Aboriginal events or Local Aboriginal History, please contact the Community Development Worker.

Welcome to Country is an important traditional Aboriginal cultural practice. It is conducted prior to official meetings, events or activities, where an Aboriginal person welcomes the community to their country. Each community (Aboriginal Tribal Area) has their own way of performing this practice. A welcome to country is a way of reminding visitors to the area that Indigenous people are part of Australia.

Welcome to Country can only be conducted by an approved Aboriginal representative of the area in which the event is being held. For example if there was an event being held in the Gandangara boundaries, a representative must be sourced from that tribe or from the traditional custodians (Darug Nation or Tharawal Nation).

The First Nations Cultural Protocols seek to recognise Australia’s Indigenous people by observance of practices and acknowledgements contained in the document.

The committee is open to all members of the Aboriginal community, non-Aboriginal people and Council Officers.

To date the Committee has supported the development and implementation of the Liverpool Aboriginal Cultural Protocols and a Reconciliation Action Plan.

Consulting with the Aboriginal Community

Aboriginal people have lived in NSW for more than 40,000 years. There's evidence of this everywhere, in rock art, stone artefacts and sites across the state.

The NSW Government passed the Aboriginal Land Rights Act 1983 (NSW) which is considered "the most generous legislation" allowing Aboriginal people to claim Crown land that is not needed for any essential purpose. It also set up a network of local land councils and a state land council (considered Australia's richest).

The Collingwood Precinct at Liverpool was officially named an Aboriginal Place and acknowledges the traditional owners of the land. The announcement was made by Dr Andrew McDonald MP, the then Member for Macquarie Fields, at a special ceremony. This precinct was a significant meeting place for the Tharawal and Dharug people and, with the Georges River nearby, a source of valuable natural resources.

Council is committed to the ongoing preservation of the site through its Plan of Management for Collingwood Precinct 2007-2017, which provides a framework for the sustainable management and maintenance of this land.

The Holsworthy area falls within the Tharawal Local Aboriginal Land Council area. The Dharawal homeland is bounded by Botany Bay to the north and the Georges River to the west and extends to the South Coast. The Liverpool area was also the home of the Cabrogal clan of the Dharug people.

The main difference between the Holsworthy art samples and others is that red and white pigment appears to have been used equally for hand stencils while in other samples red clearly dominated. Charcoal, however, was the most commonly used pigment for artwork. The area also features a number of engraving sites. All of these are well preserved and appear to be telling a story. A total of 69 grinding groove sites (for making axes etc) have been recorded in the Holsworthy training area.

Thousands of surviving trees in NSW bear scars resulting from removal of bark or wood by Aboriginal people in the past for the manufacture of canoes, shields and other artefacts. There are a number of "scarred trees" that have been recorded in Liverpool. One is on display at the Liverpool Regional Museum, kindly on loan from the Gandangara Local Aboriginal Land Council.

If you would like to learn more about Liverpool's rich local Aboriginal culture and its hidden gems, contact Council's Community Development Worker.

Click here for information on the Aboriginal and Torres Strait Islander flags. 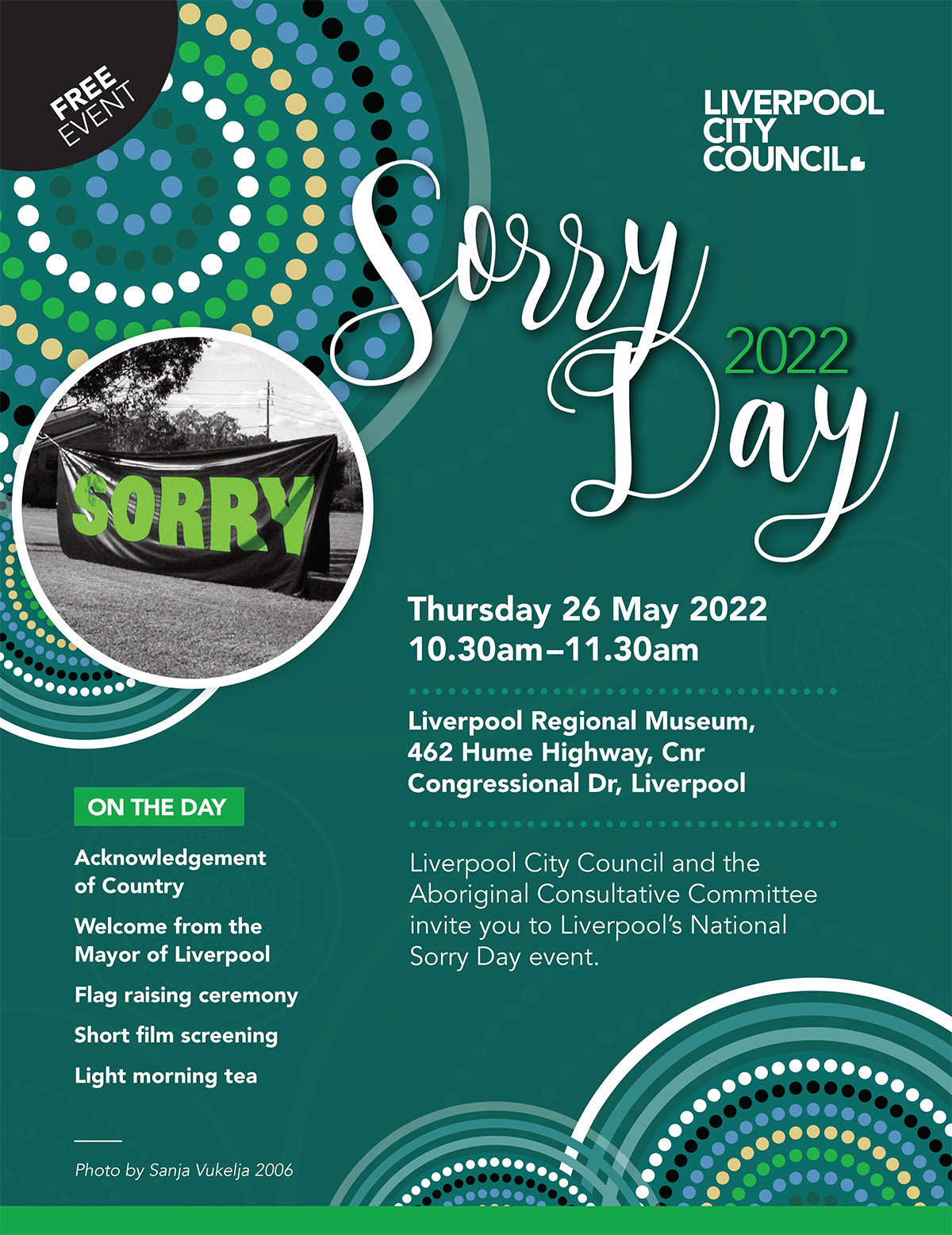 The first Sorry Day was held in Sydney in 1998, it is now commemorated nationally with thousands of Australians from all walks of life participating in memorial services, commemorative meetings, survival celebrations and community gatherings to honour the Stolen Generations.

NAIDOC Week celebrations are held across Australia each July to celebrate the history, culture and achievements of Aboriginal and Torres Strait Islander peoples.

The 2020 NAIDOC events have been postponed to a later date because of COVID-19 concerns. Check back in a few weeks or provide your contact details to receive updates on coming events, forums and local Aboriginal matters. Email Council's Community Development Worker here.

Office of the Registrar of the ALRA

University of Sydney: A History of Aboriginal Sydney

Australians for Native Title and Reconciliation