The 2168 Children’s Parliament (2168 CP) is a ground breaking initiative and a core activity of the Strong Children and Communities Project. Inspired by the Scottish Children’s Parliament, it aims to build children’s capacity to actively engage in civic life by giving voice to their ideas and aspirations and increasing knowledge and understanding of their rights and responsibilities. It provides opportunity to the 2168 children participate in decisions that are impacting their lives.

The 2168 Children’s Parliament was launched on 28 February 2017 at Liverpool City Council Chambers.  The launch was attended by representatives from participating 2168 schools, project partners, families and government delegates.  The Program has since been actively working to empower children by giving them a voice in a formal setting.

Forty Parliamentarians from ten 2168 primary schools are participating in the 2168 CP through regular workshops, consultations and excursions that inform topics for discussions at the Parliament sessions. 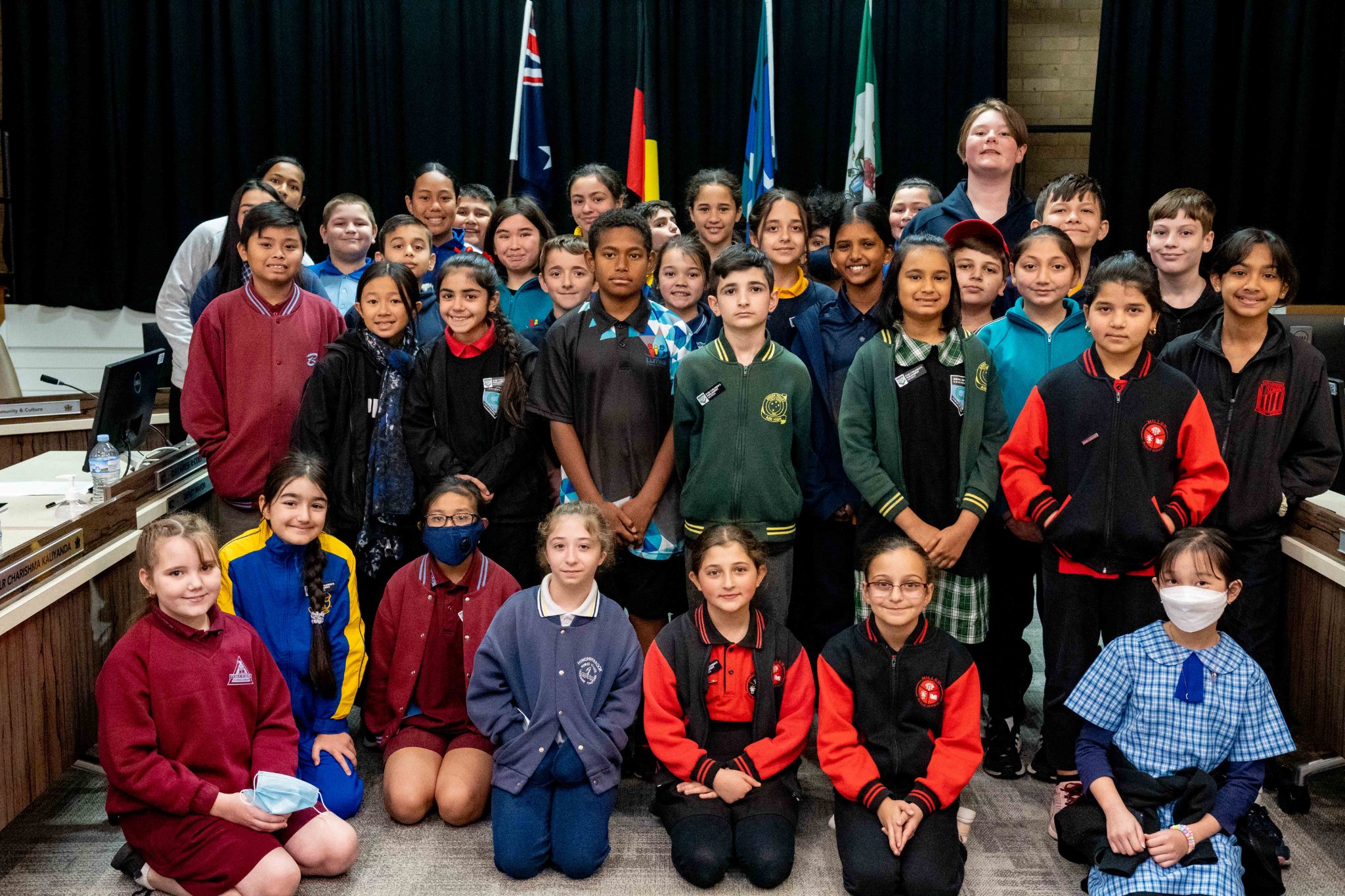 “I now feel like an actual person included, feel more like a leader and I actually represent something”.

“Now I know what my rights are, what to do if they’re not respected, and that they come with responsibilities”.

“I now know that I have rights that can protect me”.

“I dreamed of being a part of the community and making a change for my friends. I become a part of constructing a park, it’s now a place where I go with my friends”.

“I really know more and more about youth advocacy, because I'm in the Children's Parliament”.

“Everyone gets a say no matter how old you are”.

“I now know the true meaning of leadership and what it means to be a leader”.

“I now know my opinions matter”.

“Now since I’m in Children’s Parliament I know more about democracy”.

“When you make a choice that not only effects you but everyone around you”.

Partnership and collaboration with participating schools is instrumental to the success and continuation of the 2168 Children’s Parliament:

The 2168 CP has aligned it programs with the NSW Strategic Plan for Children and Young People 2016-2019, which explicitly lists Voice as a goal and objective. For details refer to the plan at: https://www.acyp.nsw.gov.au/plan

The 2168 Children’s Parliament is supported by a panel of seven Ambassadors comprising of prominent delegates with political, educational and community influences. The Ambassadors advocate on Parliamentarians’ behalf to influence policies at local, state and national levels to improve the lives of children and their community.

The 2168 Strong Children and Communities Project is delivered by Liverpool City Council under the 2168 Communities for Children Programme, a Commonwealth Government Early Intervention and Prevention Initiative. Funding and support for the Project is facilitated by Mission Australia’s Miller Pathways.  Liverpool City Council and Department of Education contribute additional funds towards activities and administration costs.

Communities for Children (also known as C4C or CfC) is an Early Intervention Program funded by the Australian Government Department of Social Services which aims to deliver positive and sustainable outcomes for children aged 0-12 years and their families in disadvantaged communities across Australia.

For more information on the ‘2168’ Communities for Children programme visit https://www.facebook.com/C4C2168/.

The 2168 Children’s Parliament, although in early years, is making a positive mark on the lives and development of the 2168 children.  After twelve months into the program a survey was conducted. Below are a selection of comments from program participants.

“Students had opportunities to present and speak in formal situations that they otherwise wouldn’t have had”. “Students have a greater understanding of the global issues e.g. sustainability as well as democracy. Students enjoyed expressing their concerns re: local park”.

“The students have taken on a leadership position within the school community and are asking other students about their concerns for the 2168 community. The students have also gained more confidence and they voice their thoughts and opinions more openly”. “The students are building a connection with other students in other schools and discussing issues that they are concerned with. Our school benefits from Children’s Parliament as schools are networking with other schools and making links with the community”.

“I think that Children’s Parliament has played a major role in the development of these students’ leadership skills. They have learnt a great deal but what it takes to be a good leader and how to most effectively do so. They have been given an active role in leadership in their community and this has helped to shape them into better, more confident leaders which has been noticed throughout the school as well.  The students have been able to understand their rights as a child and are no longer afraid to have a voice.  Also the confidence in these students speaking publically has increased. Some activities have been shared with other teachers to build strategies in classes (spread across kids). This year has been more a ‘trial’ year for us and we have just started to get good at incorporating ideas throughout the school”.

“It has definitely made the students much more confident in public speaking, working with peers not from their own school and meeting with others. Children’s Parliament has also instilled in the students the importance of making their voices heard. For one student in particular she has grown in so much confidence, she has really bloomed.  I think they have become more community conscious. They are more engaged with their local community and making aware of how they can contribute to bring about change”.  In relation to replicating some of the workshop themes within her school, she responded:  “all of the above (Leadership, global issues, local issues, gender equality, inclusion and children’s rights) have been discussed in a variety of KLA’s across K-6”.

“It has allowed them to all be actively involved in open-ended discussions. To speak up without being shy and it has given the students the opportunity to build a rapport with other students from other schools. They are actively involved in deep thought and discussions. Students have matured and taken local issues seriously. They think about things that they can implement or change in our local environment and within the school”.

“They show a greater sense of awareness of the issues in the world around them. The students enjoy attending and have made new/stronger connections with other youth in the area. They are able to communicate more confidently as they regularly discuss at the workshops. After the leadership workshop, the students build on their previous knowledge and can now express what it means to be a leader and how they can lead”.

“Her care and concern for the local community has increased dramatically. She is a more confident member of her school community”.

“He is more giving, more appreciative, values our country, and believes in gender equality”.

“She came out of her shell”.

“I wasn’t sure what to expect- pleasantly surprised. My child shows a greater interest in local and international politics. Children’s Parliament has helped my child build confidence, get involved in the community, and learn good team and leadership skills”.

“My child was quite shy, now she has opened up quite a lot. She is doing a lot of things we didn’t expect her to do before she became a member of the Children’s Parliament. She is more interested in government, issues, more outspoken”.

“He has stopped doubting himself. He is not shy and he developed self-confidence”.

“Has made her think more about the community she lives in”.

“Children’s Parliament has improved my child’s self-confidence by not being shy to speak her mind and what she believes”.

“Has developed passion for civics and politics (esp. around how governments work). She has also displayed a huge boost of confidence with public speaking”.

UN Convention on the Rights of the Child

For more information about the 2168 Children’s Parliament contact the Strong Children and Communities Project Officer, Shaieste Heidari on Mobile 0408 585 134, Tel 9821 7782 or email Heidaris@liverpool.nsw.gov.au